In the Selmeczki family tradition, we’re going to take a trip back in time to look at the great changes that have come to Castro Valley and how the families whose descendants are still here played a part in those changes. Hinted by our modern lack of confirmed territorial boundaries, this land has gone through many periods of seizure, settlement, growth, and redefinition.

Depending on whose definition you’re looking to whether it’s Castro Valley Proper, the 6.5 square miles of the originally constructed valley (pink on the map), Alameda County’s more modern definition of the “Castro Valley Urban Area”, the unincorporated Census Designated Places or CDPs definition (the black boundary line on the map), the even larger Community Planning Boundary, which includes about 70 square miles of adjoining undeveloped lands.

According to research gathered by local historian Rick Kelly in his methodically collected, yet to be published work Rancho to Ranch Homes, Mapping the Evolution of Castro Valley California “Castro Valley is more a state of mind than a geographic absolute,” though he did not invent the phrase. 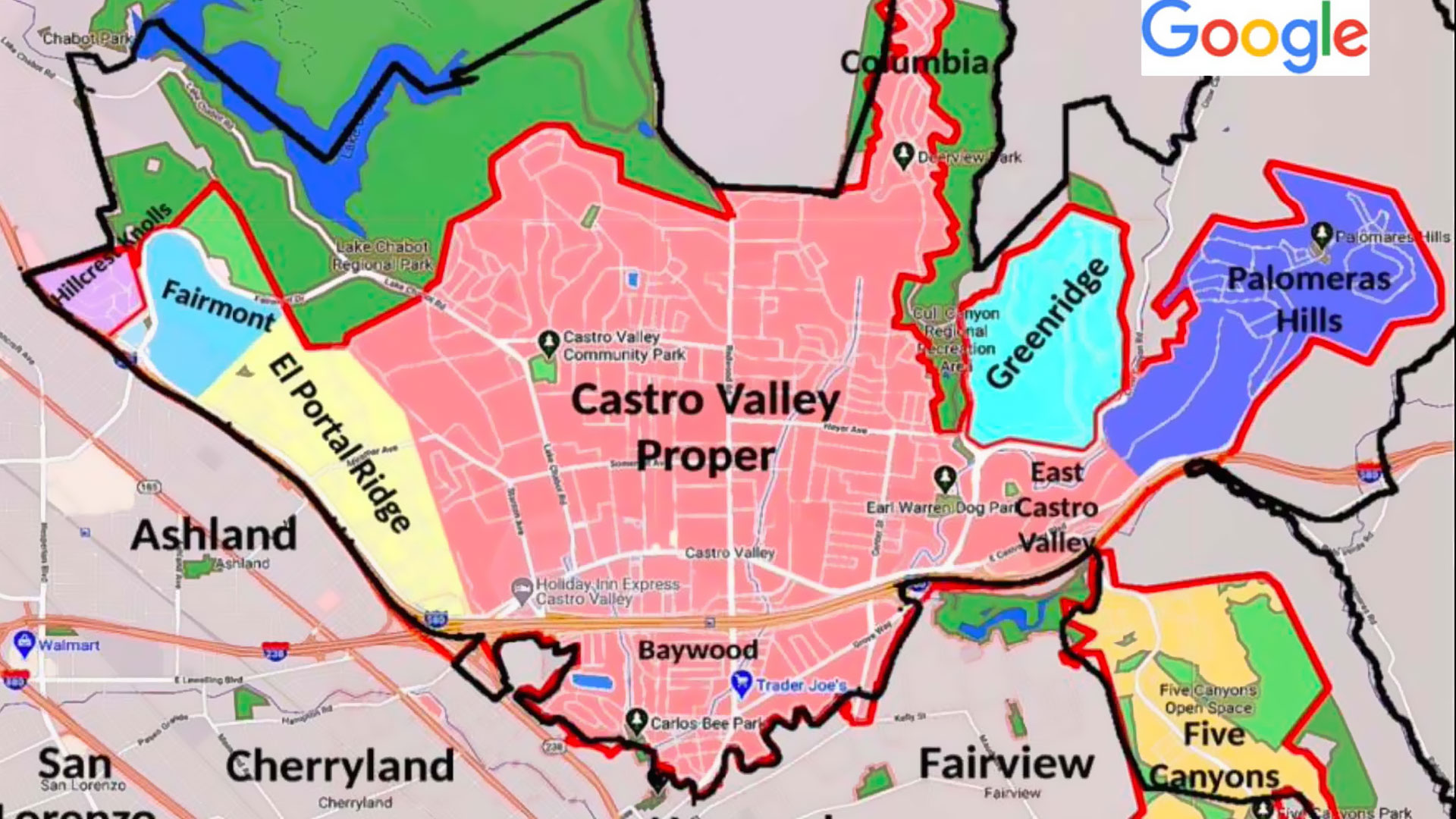 Special gratitude is owed to Kelly for dedicating time to searching through state, county, and local archives as well as seeking previously unpublished family-held knowledge from descendants of the founding families of today’s Castro Valley, adding richness and definition to our local identity.

If we were to look as far back as known history goes, the Ohlone Native Americans were the first recorded people in the area. They lived along San Lorenzo Creek on the east side of town as early as fourteen thousand years ago, by some estimates, but recorded history has the tribe in the area in 4630 B.C. Over time, many tribes inhabited the land. It was about 1500 years ago that the ancestor people of the Ohlone tribes encountered by the Spanish arrived in the lush valley that is now known as Castro Valley.

Defined in practice by their stewardship of the land and reciprocal relationships with their surroundings, the Muwekma Ohlone who spoke the Chochenyo dialect, the Bay Miwok who lived just inland in the northern Alameda and Contra Costa Counties would have passed through the land. Castro Valley sat between these two groups and included mixed families of Jalquin and Yrgin Ohlone, estimated at 385 people when the Spanish arrived.

The Yrgin lived mostly in northern Castro Valley and Anthony Chabot Park along San Leandro Creek, the Jalquin lived along San Lorenzo Creek.” (Kelly, 2021, Pg. 5) The people lived in breathable, but sturdy grass huts that allowed them to migrate with the weather and seasonal resources. They lived off the wild game and would travel to the Bay to gather shellfish and catch fresh fish, which they would dry to supplement their diet.

A recovered historical sketch of the Mission San Jose. The church construction was completed in 1809 and is located in modern-day Fremont. The original image has been maintained by the Bancroft Museum. Contrasted image courtesy of Rick Kelly.

Modern indigenous historians refer to the Spanish as invaders. The Spanish disrupted the communities’ peaceful time sharing the land and introduced the concept of land ownership and enslavement through the suppression of native culture through Spanish Catholic Missions. The first successful migratory expedition that resulted in community settlement was led by Juan Bautista de Anza in 1775. De Anza led settlers from Arizona to the San Francisco Bay Area and began founding the Missions to function in networks of Presidios (military bases), Pueblos (towns), and what later became Ranchos.

Their aim in conquering the land was not only to build military bases (the presidios) but to create farming communities to feed the growing mass of soldiers living at the military bases while normalizing Catholicism and traditional Hispanic lifestyles.

Ohlone descendants and historians have done contemporary work with persisting Ohlone Elders to capture history through the oral tradition, honoring the narratives of those scattered by the colonial aims of Spanish and gold and land-seeking Americans dominant in our historical accounts of the region.

“For fourteen thousand years the ancestors of contemporary Ohlone peoples served as caretakers of this beautiful region, extending from the San Francisco Bay to Pt. Sur. The Ohlone elders and youth featured in this exhibit represent a small portion of the Ohlone peoples who currently are active in various aspects of cultural revitalization throughout
the traditional homelands.

… the ancestors taught that Ohlone people do not merely live in this beautiful landscape, but are an integral part of it, the homeland being a sacred entity 4 which they are bound to protect.“ – Janet Clinger, Ohlone Elders & Youth Speak: Restoring a California Legacy

Mission Dolores curator and descendant of Ohlone, Bay Miwok, Plains Miwok, and Patwin Indian lineage, Andrew A. Galvan, has brought continuity to a history that has focused on the Spanish, Mexican, and early colonial American perspectives. As he’s quoted in several resources:

“Proudly, I will tell anyone who will listen, that the missions were built by Indians and for Indians. There is much that has been neglected in the telling of the history of the Mission Indians. Because of the Spanish invasion, the native world was overwhelmed. The environment was dramatically damaged with the introduction of foreign plants and animals. The flu and measles epidemics were very destructive. It was a time of survival and my ancestors came into the
missions to survive.”

By 1805, all Castro Valley natives had been scattered and missionized by the Spanish. The Spanish domain over the land, however, faded when the people of New Spain in Mexico rebelled, forming the independent country of Mexico, ending 300 years of Spanish rule in the country.

The 1821 Mexican rebellion began the successful ejection of the Spanish from North America and California became a loosely governed territory of Mexico. The land was meant to be parceled out to the natives, but most were never informed and the process was not enforced. The missions had become self-sustaining and were no longer exclusively serving a religious purpose. Instead, well-connected Spanish dons, many whose families migrated with Juan Bautista de Anza in 1775, were given land grants by the Mexican Viceroy– including Castro Valley’s namesake, Don Guillermo Castro.

Check back each week for a new installment in the series.