A Local Legacy 95 years in Business

If you’ve been around town and seen the banner hanging across the ‘front porch’ of our store, you’ll know that we’re approaching the end of our 95th year in business. The bricks and walls of our store have existed in one form or another since 1926, but as Pete’s son Ernie wrote “To appreciate Castro Valley, it helps to know some history.”

In previous years on important anniversaries, Ernie would compile an abbreviated scrapbook with family memorabilia detailing precious and little-known anecdotes that serve to show our appreciation to a community we’ve been a part of for nearly a century now. Each preceding generation of the Selmeczki family compiled evolving iterations of local history put into context by their own experiences.

As the years have passed, these iterations of history have grown along with the available archives. During the 2020 pandemic, many national and state archives were digitized making it possible for local history buffs to dig deeper than ever to look at Castro Valley with new eyes. As a local institution, we’ve received beautifully handwritten letters from our loyal patrons who have lived their lives alongside us. We’ve witnessed many of our community grow to start their own family legacies.

These past few years have brought unprecedented times for many, but the store has been a reminder that change is constant and perspective comes with the contributions of many stories. Hardware stores as an institution represent a special kinship with the community because of their unique responsiveness to changing needs over time.

We’ve been here since just after the era of the Spanish Flu of the 1920s, a time when Castro Valley housed more chickens than people and locals were buying up our entire stock of ceramic jugs to make moonshine during prohibition. The Selmeczki family has seen Castro Valley grow from just 1,000 to 1,500 residents in 1925 to just about 63,000 in the last official count.

Most folks know about how chickens were a main fixture of local commerce, but did you know that in the 1920’s they outnumbered the residents 800,000 to 1,500? That’s almost 600 chickens per person! While that sounds like a lot, it would explain why Castro Valley once ranked second highest in the state for commercial egg and chick production. Did you know along with that came an underground criminal conspiracy of chicken rustlers who would bribe guard dogs with meat to complete their heists?

Looking back in time is a great benefit to understanding who we are and a reminder that we’ve all arrived here in a different way for different reasons. Our ancestors are no different. We hope to deepen our understanding of who we are as a community to continue coexisting in a place that’s been home to our family for four generations.

With our modern ability to publish this scrapbook online, we’ve split this local history into a few chapters, guided by publicly available historical resources, punctuated by a 1998 historical outline found at MyCastroValley.com, informed by works curated and tended to by local historians Lucille Lorge and more recently Rick Kelly, who have done more to capture the moving target of living history in our town than many others combined, and found works of Muwekma Ohlone and Bay Miwok descendants and historians.

Starting with the area’s history, we’ll delve deeper into what Castro Valley looked like before Don Guillermo Castro, namesake of our town, arrived. We’ll then take a look at how local squatters and migrants became names of streets and cities like Hayward, Jamison, Stanton, Alma, Atherton, Proctor, Strobridge, Jensen, Cull, Brickell, and more. Finally, we’ll share stories and experiences about a Castro Valley closer to the modern-day.

We hope you enjoy this project and join us as we contribute to our community history in the present.

Check back each week for a new installment in the series.

Pete Selmeczki, Castro Valley Businessman for nearly a quarter of a century, last night received the Castro Valley Lion Club’s coveted award as “Lion of the Year.” Selmeczki has been engaged in business there for the past 23 years. In the early days of the Valley as he remembers them, the population was about 2200 and there were three small stores and two gas stations. Photo from the Hayward Daily Review June 1949. 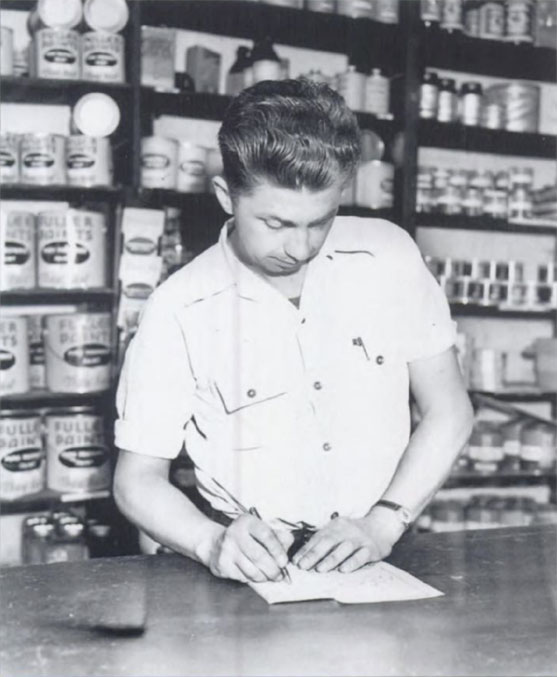 Son of Pete Selmeczki, Ernie pictured in 1950 standing at the counter of the hardware store he inherited writing on a receipt book. Behind him are shelves of paint and other supplies. Maintained by the Hayward Area Historical Society